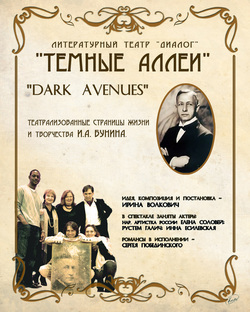 "Dark Avenues" is a literary musical performance celebrates the life of Ivan Bunin, the first Russian winner of the Nobel Prize for literature in 1933. The script of Dark Avenues was inspired by and adapted from the diaries, letters, poetry, novels of I. A. Bunin, archive documentary and music.

In Russian
Powered by