I SPEAK WITH YOU FROM LENINGRAD... 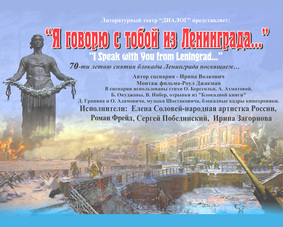 The Dialogue Literary Theater presents “I Speak With You from Leningrad…” in commemoration of the 70th Anniversary of the breakdown of the Siege (Blokada) of Leningrad on January 18, 1943. The script is based on Olga Berggolts and Anna Akhmatova’s poetry, diaries, documentary and the music of D. Shostakovich. In Russian.


Written and adapted by: Irina Volkovich